The Story of the

Big changes were in the works for the Fellsmere RR as the roaring twenties intensified, as the ownership had interested a New York fertilizer syndicate on the humus deposits near Broadmoor. The Standard Agriculture Chemical Corporation had acquired all the lands that haven't been sold yet from the the Fellsmere Co., comprising of 71,000 acres of land with 10,000 acres of peat reserves. The new president of the Fellsmere RR was Edmund Mortimer of New York City. He appointed E.P. Decker as General Manager and FW Heiser as assistant manager. The civil engineer was still I.S. Lloyd. The American Appraisal Co. appraised the Fellsmere RR for $226,430, with a book value of $109,463. The engineers have estimated it would take $80,000 to reconstruct the railroad for carrying the heavy tonnage that would be required. Income this year amounted to $6183 giving the railroad it's first profit of only $455. It will be many years before it will show another sign of black ink. The railroad needed a steam engine so the company reprieved old number 101 and sent her back to service. They had steam again!

Operations on the new Fellsmere Railroad began on September 1st, 1923 and the railroad out to Broadmoor was cleared and retied and the draglines that were once used to dig canals were now put to use digging peat deposits in the swampy muck. The railroad itself did not own any mining cars, so the mining company probably provided its own cars for transport between Broadmoor and Fellsmere. The mining company did build a large processing plant were the peat was carried and dried for shipment in boxcars to fertilizer plants all over the United States.

The Fellsmere Railroad name only lasted until June 2nd, 1924, when the Trans Florida Central (TFC) Railroad took over operations. The TFC was incorporated earlier in the year back on February 18th with 10,000 shares issued, 9,000 shares of which was owned by the Standard Agricultural Chemical Corporation. SACC in its turn was reorganized as the Ammoniates Products Corporation which in turn spelled the end for the Fellsmere operations as the company may have become over extended. None the less the 1924 fiscal year showed 1,063 tons of peat hauled. Revenues were certainly up that year as over 608 tons of lumber was brought in, though most of it was certainly used for building the new peat plant in town. LCL freight was also a big item as 1142 tons of it was hauled to town, mostly behind the 2 motorcars on the railroad. Steam was reserved for the heavy peat trains and the inbound lumber, and the rock and asphalt coming in for the roads.

A statement at the time did say the steam mixed train with its 52 seat passenger car was used a minimum of 3 days a week between Sebastian and the Fellsmere Fertilizer Plant. Employees included an eight man section crew, a maintenance of equipment foreman and two machinists, a single station agent at Fellsmere, two freight engineers, one freight fireman, two freight brakemen and a passenger conductor. Once again they were a real steam-operating railroad, but it would not last long.

1925 was even better tonnage wise but raw peat must not reap very large rates as they only earned $9,282 on 228 carloads (6880 tons) of peat. Expenses went the other way, rising to $24,072 but they did build another motorcar and a matching trailer that year.

The next year was bad for the peat company as they only mined 143 tons of the fertilizer components. Luckily roads were being built as the railroad hauled in 66 carloads of crushed stone and 34 tank cars of asphalt, which accounted for 3,251 tons. Stock shipments were also coming in as a rancher was raising cattle out on the pinelands as two carloads of breeding stock came in. Fiscal year 1926 saw revenues of $8,111 and expenses were down to $12,368.

1927 was the year the ICC issued a financial document approving the sale of the Fellsmere RR to the Ammoniates Products Corporation and the Trans Florida Central. The report had a glowing forecast for peat shipments ranging from 30,895 tons the first year and 76,461 tons for the fifth year. While the ICC approved the sale, they did ask that the Florida East Coast Railway be offered the property, as they did not like a railroad being owned by a single shipper. The FEC was not interested.  The railroad began courting the citrus growers, sugar growers and cattle ranchers in the area. They also started to clear more of the pinelands of trees and this traffic was sold as pulpwood. The stats for 1927 show this new traffic as they hauled 26 carloads of citrus, 3 carloads of pulpwood and 5 carloads of molasses. The new President of the company was E.J.S. Hughes of New York and F.W. Heiser was promoted to General Manager. New Assistant Manger was J.J. Bustin and the new Chief Engineer was J.N. LaRouce. Fellsmere itself continued to grow and more building materials and roadway materials were inbound, but the business depression coming up would soon put a stop to that. But no more mention is made of the peat traffic even though the Ammoniate Products Corporation owned the railroad until 1943. Maybe they found trucks to be a better mode of transport.  Revenues for the year were down again at $7334 with expenses slightly up at $12,777. 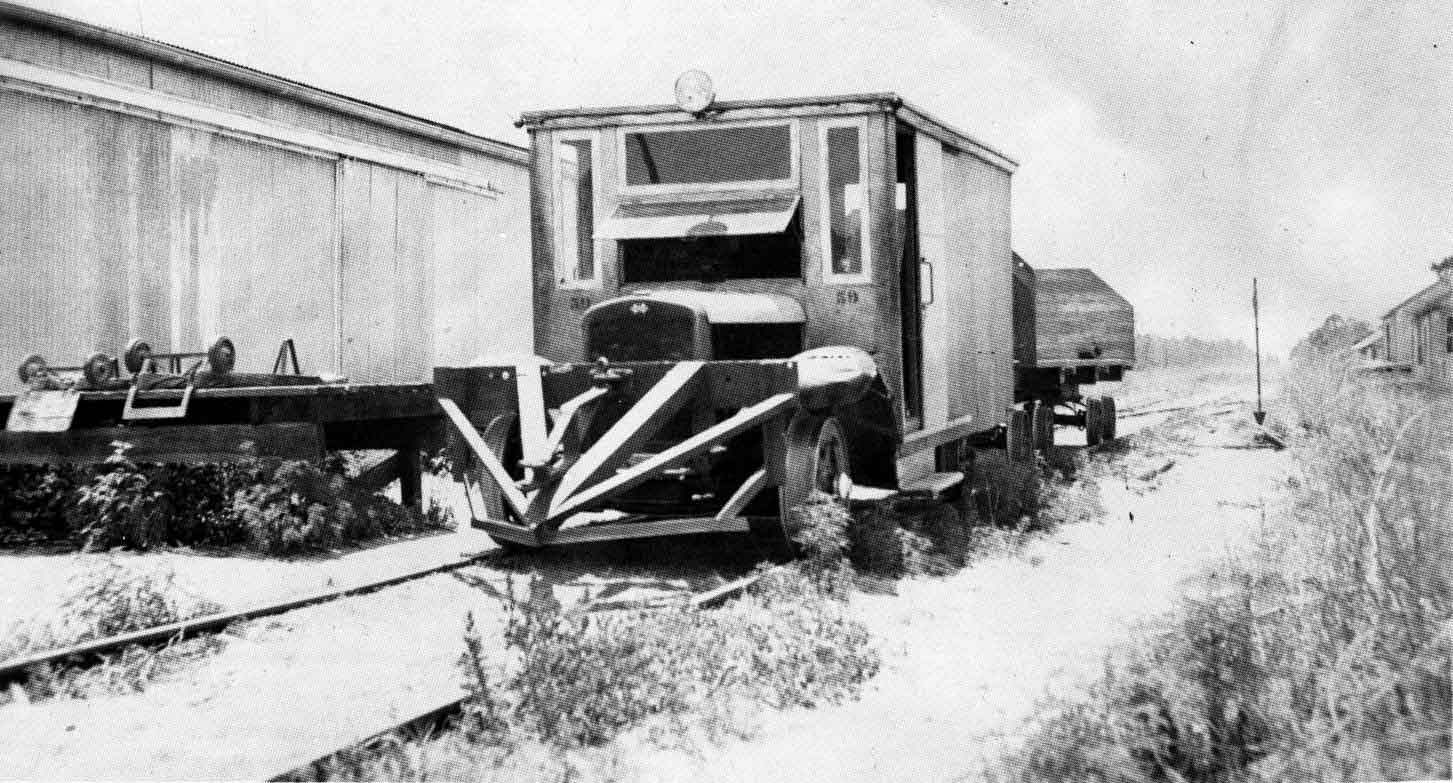 The bigger International Hervestor Rail Truck  pulling a cane wagon.
This monster was used to haul heavy freight cars from the junction, but only one at a time.
And real slow! (Don Hensley Collection)

Next year, 1928 saw 40 carloads of citrus and 10 carloads of potatoes being hauled down to the interchange. Also hauled out were 45 cars of pulpwood as the land was still being cleared. Inbound were the usual building materials except for roadway materials, as the road building had finished up. And another load of cattle was brought in to the rancher. Revenues eroded further to $5923 and the railroad cut expenses to $11916 for the year.

This is a good time to take a look at the motorcars the railroad owned as both the Railroad Commission and the Comptrollers Tax Reports mentioned the three cars. All three were built from Ford one ton Model A trucks and two were used in company service. The third car was converted with a body for carrying 12 passengers and express shipments. 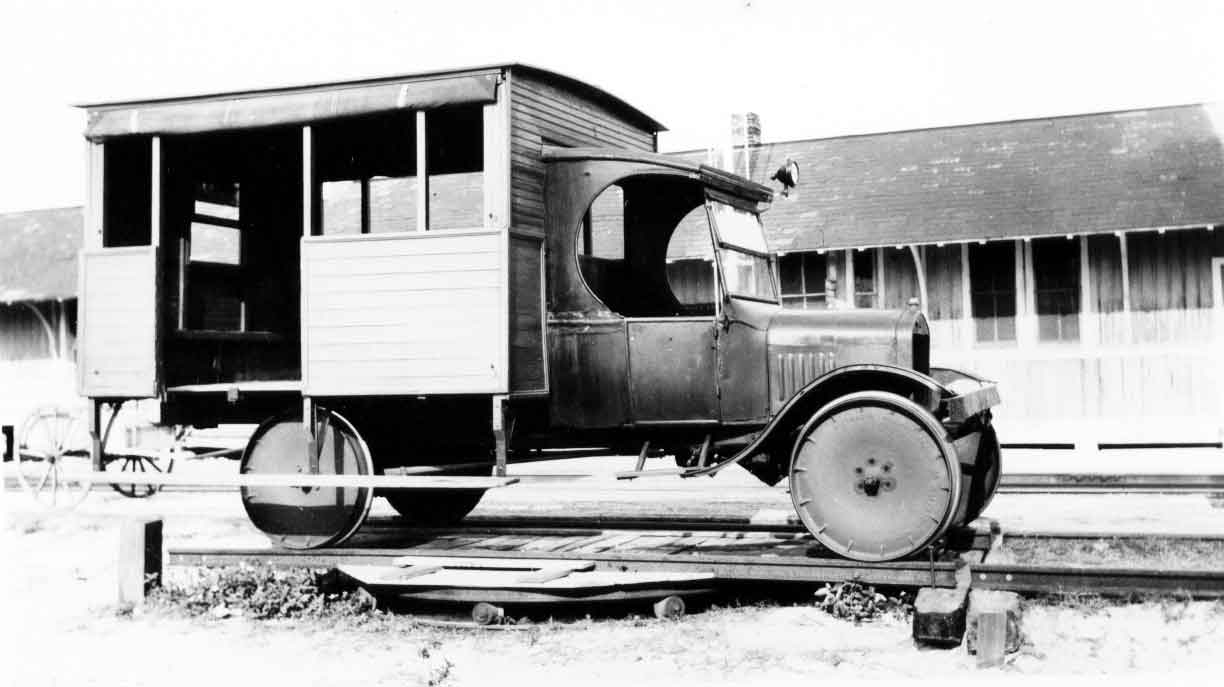 1932 was completely different though. Gone was both the citrus and logs and almost all shipments that year were incoming material (151 carloads) for the new sugar refining plant that was being built. This was also the year that steam locomotive 101 was scrapped. 2 cars of sugar was shipped in 1932 and in 1933.  Also shipped in 1933 was 8 cars of cattle. Incoming was 57 car loads of machinery for the sugar mill. 1933 also saw the appearance of another gas motorcar and 2 trailers. I think this was the #39 built from a heavier International harvester truck and used to pull freight cars when needed. 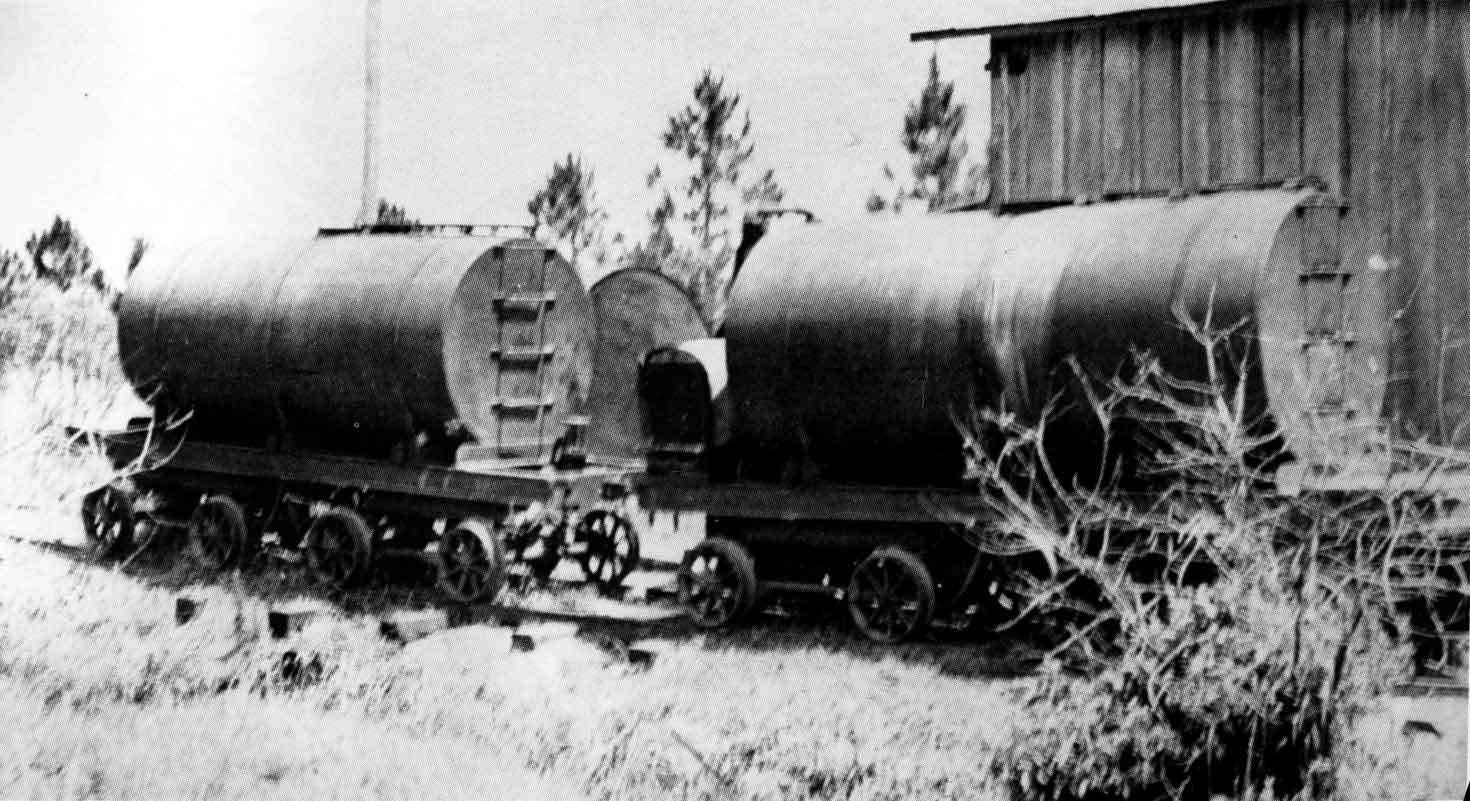 1935 was the beginning of the sugar era for the TFC, which fueled the railroad for the rest of the time it was operating. While the railroad lost $400 that year, the beginning of short-term prosperity for the little pike was beginning. 1935 only saw 9 cars of sugar and 24 cars of molasses but 1936 saw 74 cars of sugar and 20 cars of molasses being slowly hauled down to the FEC interchange with the rugged # 39 in charge and the 39 would have brought in 39 car loads of fertilizer to boot. What a strange sight that must have been as the motor car would had struggle just to pull one car at a time, with a brakeman riding the car to provide brakes. The motorcar had no air to operate the brakes on the cars and link and pin couplers to boot. The road stayed in the black from 1936 to 1939 under this formula. 1940 saw a small deficit, which they recovered from in 1941. However the war years saw deficits in 1942 through 1944. 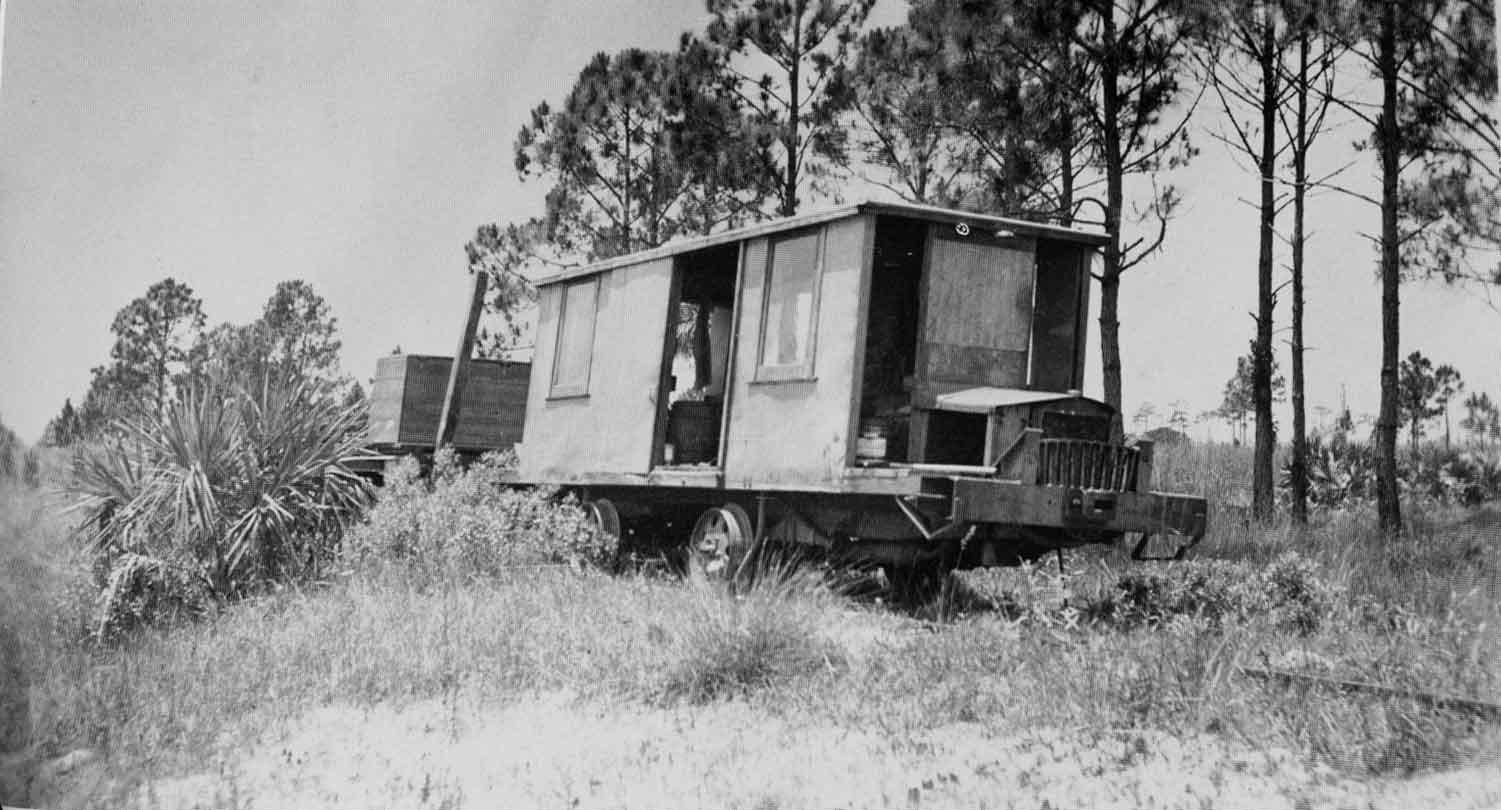 The Beast on its way to the sugar fields with empties. (Don Hensley Collection)

The war also brought a change in ownership. The Ammoniate Products Corporation finally sold the TFC to the Fellsmere Development Corporation in 1944. J. Adalberto Roig as president, Antonio A. Roig as vice president and Jose A. Lopez, Jr. as secretary/treasurer led the FDC.

Fellsmere Sugar Producers purchased in 1946 to 1948 seven Whitcomb diesel mechanical, model # 8DM50B, numbering them from 1 to 7.These 8-ton critters had a Caterpillar D-4600 engine.  The Trans Florida Central paid for one of the engines, though it is said that they could use any of the engines when needed. It is not known which engine they did pay for or if it was ever lettered for the TFC. However I think it was either #6 or #7 as they were the only two purchased in 1948, when the TFC was credited with purchasing it. Anyway none of the diesels had airbrakes so riding the cars would have been required, but they did had knuckle couplers! 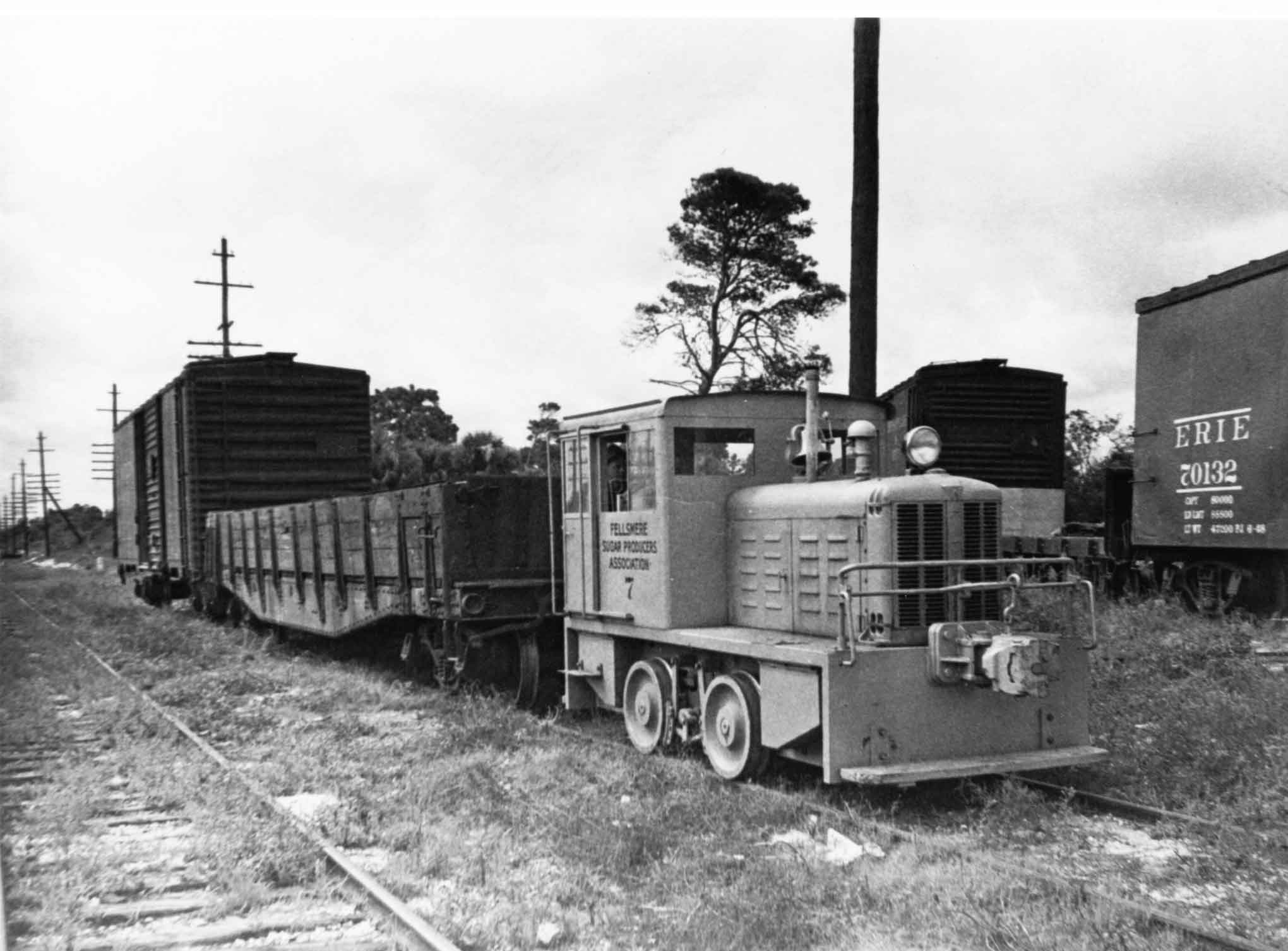 The purchase of the Whitcomb in 1948 caused a large deficit of $17,000.  But it looked like a good deal as over 320 car of freight was moved that year. However next year only 143 cars were hauled as trucks were eroding business. 1950 & 1951 held their own with similar traffic and small profits but 1952 had only 30 carloads of freight.

The end came on November 30, 1952,when the ICC allowed the Trans Florida Central to shut down. The diesel was sold back to the Fellsmere Sugar Producers which netted the railroad a $6,000 profit that year.

For more on the "Critters of Fellsmere"